Time preference
Basically, time preference is the assumption that, all else being equal, people prefer a given end to be achieved sooner rather than later. In the Misesian branch of the Austrian school, it is derived from the assumption about human action. If one were to assume that individuals didn't prefer to attain their ends sooner rather than later, then they would never act. The further into the future the attainment of the end appears to be, the less preferable it is. In other words, the less waiting time, the more preferable the end is. It may be called the preference for present satisfaction over future satisfaction or present good over future good, provided the same satisfaction (or good) is compared over periods of time.


Savings
In order to have savings, consumption has to be restricted. The existence of savings enables the formation of capital. The saving may result from an increase in the available sup­ply of consumers’ goods. Moreover, saving involves the restriction of consumption compared to the amount that could be consumed; it does not always involve an actual reduction in the amount consumed over the previous level of consumption.

Because capital is perishable, it must be renewed, if man wishes to enjoy the fruits of higher production. Saving must be repeated to preserve the structure of capital, over and over.

As Mises put it: "saving and the resulting accumulation of capital goods are at the beginning of every attempt to improve the material conditions of man; they are the foundation of human civilization. Without saving and capital accumulation there could not be any striving toward non-material ends."


From time preference to savings
To enjoy greater consumption in the future, one must extend his productivity first. In its turn, to improve productivity, it is necessary to accumulate capital. As you saw above, to have capital formation, savings must be generated, which implies refraining from spending all the resources in consumption at present time.

Accordingly, saving insinuates giving up some benefits at present – this is the price paid for the attainment of better productivity and greater future consumption. The value of the price paid is called cost, and costs are equal to the value of the satisfaction the alternatives to saving would give, which one must forego to attain the end aimed at – what economists call the opportunity cost.

In addition, a positive time preference is the kind that happens in the real world. This simply means that individuals prefer to achieve their ends in the present rather than in the future. The implication of this assumption on savings is that the return on savings must be in excess of the cost of savings. If the costs are too high – if savings can’t better an individual’s life and well being, i.e. the alternatives to saving are preferable – then saving will not be undertaken.


From savings to interest rates
The interest rate reflects the opportunity cost of savings – or of future consumption. Because of the concept of positive time preference, interest rates can never be zero and definitely never negative.

An increase in the pool of funding sets the platform for lower interest rates. Basically, it's the law of supply and demand working. The more resources are made available to fund investment endeavours, investors with funding necessities will pay the creditors (the ones with funding capacity) less for their funds, making the interest rate, a.k.a price of money, smaller. 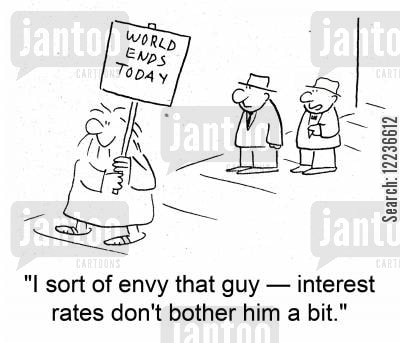